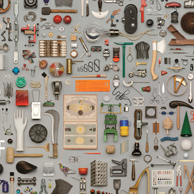 products without designers and companies

The Anonymous Design defines everyday products and objects of which the designer is not known and often not even the production company. In a moment in which great importance is given to the "signature" of the designer, to the brand or to the brand, more generally in a phase of transformation of contemporary aesthetic goods, the "normal" virtues of anonymous design deserve to be supported and proposed to template.

To cite some examples of "anonymous products" of quality design: the Moka Bialetti, the Ape Piaggio, the Chiavari chairs, the Borsalino hat, the pressure cooker, the "La coppa del nonno" ice cream, the Campari bottle Soda (inspired by Fortunato Depero), the drawing pin, the Swiss army knife, the Zip zipper, the beach deck chair, the Tupperware containers, the Walkman, many Swatch watch models and Persol glasses.

Although the designer of such products is unknown, it is possible to consider them as the result of a project born from a functional need, that of carrying out a job or solving a problem, realized following a client or at the request of the market, considering the various economic aspects , production, distribution, communication and marketing.

Anonymous design creates curiosity and interest in designers and companies but also in the consumer public. Exhibits and publications dedicated to objects and artifacts are dedicated to anonymous design, from the pre-industrial age to the present day.

Note the passion of Achille Castiglioni for the objects of anonymous design, witnessed by the window of his studio, which collects those collected over a lifetime. To celebrate the master's hundredth birthday. The Achille Castiglioni Foundation entrusted the curatorship of an exhibition to Chiara Alessi and Domitilla Dardi who asked 100 Italian and international designers to donate their anonymous object.
100x100 Achilles is the collection of these gifts and some "greeting cards" sent by colleagues who have known Castiglioni, former students or designers who have been inspired by his work, among others, the Bourorullec brothers, Studio Formafantasma, Konstantin Grcic, Giulio Iacchetti, Enzo Mari, Alessandro Mendini, Philippe Starck, Patricia Urquiola.
A tribute to the master who is also a focus on one of the most investigated themes in the design world today. Because it is in the curiosity for everyday objects and from the investigation of their function that new planning can find space.

Franco Clivio, designer and teacher, in particular at the Hochschule für Gestaltung in Zurich, for decades has collected with passion the everyday objects often considered insignificant. A sort of collection of curiosities that have been ordered an exhibition of more than a thousand ustiles, classified by function, system types, formal subjects or families. This unique collection was published in the form of a surprising book, Hidden Forms, in 2009.

It pays tribute to the ingenuity of creators and artisans by analyzing problems related to the original and its copies, to the model that allowed the development of an entire range of products, to the problems they sought solutions to, to the choice of materials used, natural or artificial.