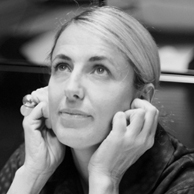 Patricia Urquiola was born in Oviedo in 1961, Spain, lives and works in Italy, in Milan. He studied at Faculdad de Arquitectura de Madrid and the Milan Polytechnic, where he graduated in 1989 with a thesis supervisor Achille Castiglioni, who has seen which is an assistant at the Politecnico di Milano.

Professionally trained in Italy, with the teachings of the great masters such as Bruno Munari, among the fathers of the "Milanese school".

While living in Italy Patricia Urquiola is considered "very Spanish", an Asturian of Basque descent".

From 1990 to 1992 he was assistant Achille Castiglioni and Eugenio Bettinelli at the course of industrial design at Milan Polytechnic and ENSCI Paris.

After graduation, from 1990 to 1996, he worked for the office "product development" Maddalena De Padova, becoming his manager. Here she met Vico Magistretti, with whom he collaborates.

Magistretti and Castiglioni, two key figures in Italian design, influenced his outlook and led her to cultivate her talent and ability.

In 1998 she began working with Moroso: her upholstered furniture, elegant and comfortable, not only capture the attention of the experts, but also that of the general public.

Design a new conception of the seat with interchangeable components for a living environment really changed. Patricia Urquiola does not believe in boring but in a modular arrangement informal, flexible and modifiable, mixing various components. With his furniture, tends to create an environment that invites a feeling of intimacy and comfort and togetherness.

Opened his own studio in Milan in 1998, continuing his many collaborations, covering design, architecture and fittings.

Her sofas Step and Lowland were selected for the International Design Yearbook 1999/2000, Lowseat was also chosen to represent Italian design in the Tour of Furniture Design of 2001.

In 2003 he designed the Bague table lamp for Foscarini with Eliana Gerotto.

In 2001 he took part, with the experience and influence absorbed from the world of art, architecture and above all by its protagonists from Milan, international seminars at the Domus Academy Designing Exhibition in Australia, and chaired the jury of 19 ° CDIM Award.

Its products have been selected for Italian Design 2001 Exhibition and Intenational Design Yearbook 1999 and 2001.
In 2001, the jury president of 19 ° CDIM Design Award and is a professor at the Domus Academy.

Practice the profession in his own studio in Milan in the field of design, and architecture of the stands.

Some products designed by Patricia Urquiola: