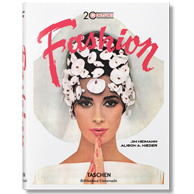 The book 20th-Century Fashion, published by Taschen (in English version) deals with Fashion and its evolution during the twentieth century, of the transition from exclusive business, reserved to the rich elite of Parisian salons, to the worldwide industry with millions of employees in the various production and commercial sectors.
The new seasonal trends are often distributed in stores before the last model has finished running on the catwalk.

The female clothes that characterized an era have changed over time evolving into a path that has profoundly changed them. House of Worth crinolines have given way to Vionnet evening dresses, Dior style and Quant's Chelsea Look, Halston's white trouser suits, and Frankie B.'s low-waisted jeans.

In the men's fashion, long before Hawaiian shirts, tight ties or baggy trousers entered the scene, the ready-made suit marks the disappearance of the tailor-made, handmade dress.

The book "20th-Century Fashion" offers a retrospective of the style of the last hundred years through 400 images of fashion advertising from the Jim Heimann collection.

Using the advertising images collected over a century, the book documents the evolution of fashion as it was received by mass culture, decade after decade.

After an in-depth introduction, each chapter includes a text and images divided into chronology that tells the stories of the creators of style and trends of the last century.