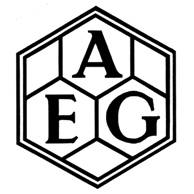 AEG was founded in Berlin in the 1887mby Emil Rathenau. It all starts with that Emil had bought some patents from American inventor Thomas Edison's. The first product under the brand AEG is electric bulbs.

It was thanks to the creativity which Behrens was created the concept of "corporate identity" for the first time. He was born on product design. Behrens incorporated himself and his approach to design within the corporate culture. During his collaboration with AEG, was the first to create logos, advertising materials and business publications with a smooth, unified design.
He designed buildings tailored to the individual needs of AEG and its workers.
Therefore, for the first time the company became a cornerstone of the philosophy of an industrial society and its brands.

The different model that Behrens brought to AEG and the idea that German industrial design was a whole was based on the concept of development of domestic appliances taking into consideration the appearance and specific function of this object. He changed the form of functional objects in a way that can still be observed today in the innovative principles developed by the major designers of AEG.

The products are designed for the twenty-first century, inspired by a leading figure in German history and AEG: Peter Behrens, the founder and spiritual father of industrial design of the AEG design team today.

In 1907, Peter Behrens has published "Art and Technology", ie the concept to the philosophy of the "perfection of form and function." He was called by AEG to become the first industrial designer in the world, and famous names such as Mies van der Rohe and Le Corbusier worked with him.

Behrens worked and was the inspiration behind some of the most famous names of Modernism, including Walter Gropius, the founder of the Bauhaus school. In the years after 1914, even the designer Wilhelm Kreis and Hans Krebs had the AEG internal consultants, under the supervision of Behrens.

In 1953, Peter Sieber founded the first design office of AEG in Frankfurt. His successors were Eberhard Fuchs and Hans Werner Friedlaender, who continued to maintain quality of design AEG successfully.

Today we are surrounded by strong brands and easily recognizable. At one time it was not.