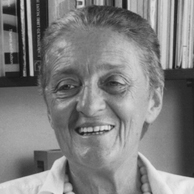 Anna Castelli Ferrieri was born in Milan on August 6, 1918. Daughter of Enzo, intellectual, publisher and founder of the Convegno magazine, she created a cultural club, frequented among others by Luigi Pirandello, Umberto Saba and Eugenio Montale.

Attracted by the avant-garde and the Bauhaus, she began studying architecture in 1938, at the Politecnico di Milano. Over the years she is a pupil of Franco Albini from whom she learns the rationalistic approach. Later he worked in his studio where he came into contact with the architects Piero Bottoni and Ernesto Nathan Rogers, engaged in the reconstruction of Milan.

In 1942 she graduated in architecture and left Milan because of the German occupation, with her husband Giulio Castelli with whom she raised her children Valerio and Maria.

Returning to Milan in 1946, she founded her own studio and became editor in chief of Casabella, an architecture magazine and correspondent from Italy for the English periodical Architectural Design.

At the Triennale di Milano in 1947 he curated the preparation of the "Mostra del Mobile" for which he received the Diploma of Honor and the Gold Medal for the design of a children's bed and an armchair.

Between 1959 and 1973 she collaborated first and then became associate of Ignazio Gardella, rationalist-organic architect.

Among the works carried out are the offices of Alfa Romeo in Arese, Tecnitub in Podenzano, Castek in Milan, and Kartell in Binasco.

He takes care of the restoration and reconstruction of historic buildings, including the Chiostro del Bramante in Milan, and Palazzo Benci in Florence. He deals with urban planning, with the regulatory plans of Milan, Turin, Genoa and some areas of Vicenza, Stintino and others abroad.

Since 1966 she collaborates with Kartell, founded by her husband Giulio Castelli in 1949. The pioneer company in Italy in the production of plastic objects for daily use.

Among the main projects of Castelli Ferrieri are the 4870 stackable chair (winner of the Compasso d'oro) and the 4970/84 furniture, modular containers for the home, following its design principle, according to which, everyday objects could have a functional design.

In 1994 he designed the Hannah cutlery line for Sambonet, with which he again received the Compasso d'oro.

From 1969 to 1971 Anna Castelli Ferrieri was president of ADI (Association for Industrial Design), member of INU (National Urban Planning Institute) and founder of MSA (Movement of studies for architecture)

In 1990 she founded the design group ACF Officina, together with some alumni.

In 2016 the Municipality of Milan decided to register its name in the Pantheon of Milan, inside the Monumental Cemetery and in December 2017 it named it a stretch of road in the Citylife area.