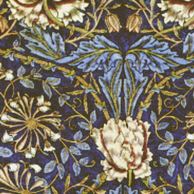 The international movement of fine arts and decorative arts Arts and Crafts was born in Great Britain in the late nineteenth century, developed and continues to affirm its influence until 1930 also in Europe and North America.

In Japan, a similar movement emerged in the 1920s with the name of the Mingei movement (literally "folkloric arts" or "popular arts").

Born as a reaction against the state of impoverishment of the decorative arts of the time and the conditions in which the products were made, it developed between 1880 and 1920. We look at the past, at the medieval artisan tradition, with the creation of simple shapes by taking up decorations, romantic styles and popular decorations.

The movement proposes an economic and social reform and opposes the nascent industrial production method.

The main architect of the Arts and Crafts is William Morris, the name of the movement was coined only in 1887, thanks to T.J. Cobden Sanderson.
In Scotland he is associated with key figures such as Charles Rennie Mackintosh.

The projects of William Morris and his company become popular and attract interest when they are exhibited at the Great London Exhibition of 1862.

Much of Morris & Co's early work was commissioned by churches. Morris wins important commissions for interior design at St. James's Palace and the South Kensington Museum (now Victoria and Albert Museum). Subsequently his work became popular with the middle and upper classes, despite his desire to create democratic art, and in the late nineteenth century.

Arts and Crafts design is the prevailing style in the interiors of houses in Britain, copied into products made with conventional industrial methods.

The spread of Arts and Crafts ideas during the late 19th and early 20th centuries led to the founding of many craft associations and communities, although Morris had little to do with them because of his concern for socialism at the time . One hundred and thirty arts and crafts organizations were formed in Britain, most of them between 1895 and 1905.

William Morris' ideas were influenced by the Pre-Raphaelites, of which he had been a part, and by his reading of Ruskin.

In 1861 Morris and some of his friends founded the company Morris, Marshall, Faulkner & Co., which designs and manufactures decorative objects for the home, including wallpaper, fabrics, furniture and windows.

The work of Art and Crafts and William Morris represents the starting point for modern industrial design.