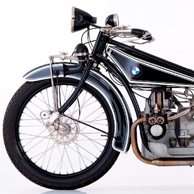 The BMW R32 was the first motorcycle produced by BMW from 1923 to 1926.
Manufacturer of aeronautical engines during the First World War, BMW is forced to diversify production after the Treaty of Versailles prohibited German aeronautics and the construction of aircraft to Germany. Initially, BMW turned to the design and production of industrial engines.

In 1919, BMW designs and manufactures the flat-twin M2B15 engine for the Victoria Werke AG in Nuremberg. Initially the engine is designed as a portable industrial engine, but finds its main use in Victoria motorcycles.

e engine was also used in the Helios motorcycle built by the Bayerische Flugzeugwerke, which was later merged into BMW AG.

This new project, with the name BMW R32 goes into production in 1923, becoming the first motorcycle produced by BMW.

To solve the cooling problems encountered with Helios, Friz steered the R32's M2B33 boxer engine with the cylinder heads oriented on each side for cooling, as previously used by the British ABC.

The R32 has defined the layout of the twin-drive boxer powertrain, which BMW is still using today. BMW used shaft drives in all of its motorcycles until the introduction of the F650 in 1994 and continues to use it on twin-cylinder models.