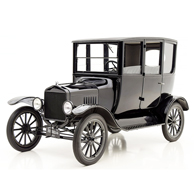 The Ford Model T, also known as Tin Lizzie (tin lizard), Flivver (grinder) or simply Ford T, is a car produced by the Ford Motor Company from 1908 to 1927.
The first model of the standard Model T was born in the factory in Piquette (Detroit) on September 24, 1908 and is the first car produced in large series using the assembly line technique.

Designed by Henry Ford, Charles Harolde Wills, József Galamb e JenĹ‘ Farkas, the Model T is not the first car produced by Ford. Other models, including some prototypes, are prior to 1908.

The characteristics of the car are rear-wheel drive, 2-speed planetary gearbox + reverse gear. This type of gearbox is revolutionary for the time (1908), because it allows the passage from the first to the second gear without the use of the clutch. The clutches of the time were in fact not very functional.

Considered the first economic car, the one that allowed to travel to the American middle class, thanks to the new manufacturing systems introduced by Ford, with the efficiency of production in assembly lines rather than individual hand work.
The Model T is a revolutionary car for the entire industry of its time, the first produced in large series using the assembly line and the construction with interchangeable parts.

The Piquette plant can not cope with the growing demand. Only 11 cars produced at the factory during the first month of production. In 1910, after reaching 12,000 units, production moved to the new Highland Park plant.

Starting from 1914, it takes 93 minutes to build a Model T, thanks to the development of the assembly process. In this year, Ford alone produces more cars than all the other competitors put together.
The commercial success of this car is huge, between the mid-decade and the 1920s one in two cars among all those circulating in the world is a Ford Model T.
This success allows Ford, between 1917 and 1923, to continue sales without buying any advertising space.

Between 1915 and 1925, to speed up production, the Model T is only available in matt black (known as the bottom), used to save time and reduce costs.
Famous the phrase attributed to Henry Ford according to which "Every customer can have a painted machine of any color that desires as long as it is black".
In reality between 1908 and 1914 and in the final two years 1926 - 1927 the model T was also available in different colors from black in particular, green, brown, gray and blue.

Since 1914 Henry Ford has raised employee pay to $ 5 a day (about double the sector) and then to be the best paid with $ 8 a day, allowing them to buy the car they produced themselves.