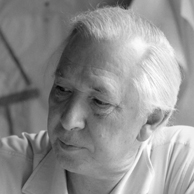 Hans Jørgensen Wegner was born in 1914 in Tønder, a city in southern Denmark. Between 1928 and 1932 he studied as a carpenter's apprentice with the Danish master cabinetmaker H.F. Stahlberg and fifteen years Wegner builds the first chair.

Later, moved to Copenhagen, he attended the School of Arts and Crafts from 1936 to 1938 under the guidance of Orla Mølgaard-Nielsen before starting to work as a designer in the famous architects' studio of Arne Jacobsen and Erik Møller.

Hans Wegner is known for having produced projects and quality products in collaboration with many producers with whom he contributed to the international popularity of Danish design in the mid-1900s.

Wegner's style is described as "organic functionality", close to the modernist school, born and developed mainly in the Scandinavian countries with contributions, among others, by Poul Henningsen, Alvar Aalto and Arne Jacobsen.

In 1938, Wegner designed the furniture for the new town hall in Aarhus. At the same time he began collaborating with the master cabinetmaker Johannes Hansen, who was a promoter in bringing the new furniture design to the Danish public at the Exhibitions of the Copenhagen Cabinetmakers Guild.

Hans Wegner founded his design studio in 1943 and created a series of light chairs for Carl Hansen & Søn from 1949 to 1968, including the Wishbone Chair, in production since then at Carl Hansen & Søn.

The core of Wegner's legacy is its attention to showing the interior soul of furniture through the use of a simple and functional design.

His aesthetic is based on a profound respect for wood and its characteristics, due to his training as a cabinetmaker and to his deep knowledge of the complex carpentry techniques and to a great curiosity for other natural materials that allowed him to bring an organic softness and natural to formal minimalism.

Over the course of his life Wegner has designed over 500 chairs, of which over 100 have been mass-produced and many of which have become icons of international design.

Many of Wegner's wooden chairs are characterized by traditional joinery techniques including tenon and mortise, dovetail joints and sculpted elements such as armrests and seat supports. Wegner also used the traditional construction for upholstered pieces and often mixed materials such as solid wood, plywood, metal, upholstery, rope.

Hans Wegner said of his work "I have always wanted to achieve impeccable things of exceptionally high quality ..." The key designs described here are known for taking traditional elements and pushing them to extreme tolerances and distillations.