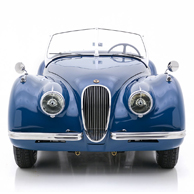 The Jaguar XK 120 was presented in a roadster version (two-seater car uncovered) on October 27, 1948 at the London Motor Show.
The purpose of the presentation was also to propose a car, for demonstration purposes, with the new Jaguar XK6 engine.
The model creates a lot of interest and positive comments enough to convince William Lyons (British entrepreneur and designer, founder of Jaguar) to produce it in series.

The Jaguar XK 120 is equipped with a chassis with side members and cross members, derived from that of the Jaguar Mark V sedan from which it also inherits the front suspension with independent wheels and the rigid axle rear suspension with leaf springs.

The 160 bhp Jaguar XK6 engine, a six-cylinder in-line 3.4 L engine with an alloy cylinder head, twin SU carburettors and a double overhead camshaft, was technologically advanced at the time.
The mechanics of this engine, modified in the 3.8 L and 4.2 L versions, would have survived until the 1980s.

Jaguar, in May 1949, organized a press demonstration with an XK120 roadster version on the highway between Jabbeke and Aeltre, Belgium, using the second product, white, left-hand drive.
With the convertible top and windows closed, and the improved underbody aerodynamics, the top speed of 203.498 km / h was registered by the Royal Automobile Club of Belgium. After removing the soft top, windscreen and side windows, with a deflector mounted at the front and a cover on the passenger compartment space normally intended for the passenger, the maximum speed of 219.830 km / h was reached.
Following this test, the Jaguar XK 120 proved, at the time, the fastest mass-produced car in the world.