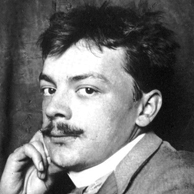 Koloman Moser known as Kolo was born in Vienna in 1868 and is one of the founders of the Viennese Secession. Son of the administrator of the Theresianum, an aristocratic academy with all kinds of craft workshops. By attending these environments he develops his aptitude with different trades, materials and techniques. In secret he takes drawing lessons and in 1885 at the Academy of Art.

He dedicates his activity to applied arts, design, painting and decoration and in particular to the production of fabrics, furniture, windows, posters, furnishing accessories, jewelry.

Moser joins the Viennese Secession with Gustav Klimt, Hoffmann, Helmer. He contributes to the birth of the monthly magazine "Ver sacrum", of which he takes care of the graphics and layout.

Become a leading figure, one of the leading figures of artistic research in Vienna. He dedicates himself to setting up exhibitions, scenography, interior design, fashion.

He collaborates with Josef Hoffmann with whom he provides the general lines of the interior projects in which craftsmen and artists participate for the realization. The furnishings for the industrialist Nikolaus Dumba's palace were designed between 1897 and 1898 by Hans Makart (the studio), Gustav Klimt (the music hall) and Franz Matsch (the dining room).

Koloman Moser, Kolo, as he is called, has a complex vision, projected into the future. He senses that in order to initiate a cultural change he must have a project that must be widely disseminated. Moser and Hoffman teach at the university and train generations of new artists.

In 1903, together with Josef Hoffmann, he founded the Wiener Werkstätte whose program of activities was presented in the periodical Hohe Warte, of which Moser himself has been co-editor since 1904. The same year he was commissioned to make the windows of the church of the hospital am Steinhof.

In 1907, after years of collaboration, he leaves the Werkstätte due to divergent opinions.

He furnished the "Klimt" room for the Kunstschau in 1908 and also dedicated himself to works for the theater.

In 1912, in Vienna, he exhibited the paintings of his first personal exhibition at the Mietke Gallery. In 1913 he was in contact with Hodler and exhibited in Budapest, Rome, Düsseldorf and Mannheim. The following year he exhibits stage art in Zurich.
The following years he still devoted himself to scenography but without success.

In 1920 the Wolfrum publishing house organized a posthumous exhibition of his works.