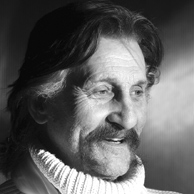 Luigi Colani is considered also as an industrial designer, also one "scientist - artist" given the breadth and originality of its projects and its research, often visionary, precursors of innovative developments.

Colani was born in Berlin by his father, architect film of Swiss origin and the mother of Polish origin, employed by a theater company. The birth name is Luz that will change later in Luigi.

Since the family was very large with many children, it is not possible to make many gifts to all, parents educated them to build on their own their own toys. Such teaching is developed by Lutz small that in a few years is capable of building objects using various materials, such as wood, iron, chalk or clay.
His favorite toys are the means of transportation, hence the small Lutz used to build model airplanes, cars or ships.

At the beginning of 1953 trasfersce in California, at the aircraft manufacturer Douglas Aircraft Company, where he participated in a research on new materials, already being responsible.

At the end of the same year, Lutz Colani returned to France, where he began to work on automotive design, in particular the aerodynamics of a car body. In 1954, in Geneva, receives the Golden Rose award for his work in the field of aerodynamics automobile.