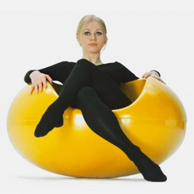 Pastil chair is an ergonomic rocking seat, designed by Eero Aarnio in 1967. The initial prototype of the seat was made by Aarnio himself in polystyrene to verify its dimensions, ergonomics and oscillation capacity.

In 1967 the Aarnio family lives in Lauttasaari, a small island adjacent to Helsinki. In the house there is a laboratory room where Eero spends time drawing.

The starting point for Pastil's project is the size of the diameter which initially is the same as the opening of the Ball chair. When the sketch is ready, Eero sends it to the Asko factory in Lahti, where his other projects were produced.

The soft and rounded shapes at the time were difficult to draw, Eero Aarnio models a prototype from a block of polystyrene to verify shapes and sizes and to evaluate that the model behaves as imagined.
The proportions of the first attempt were not satisfactory and Eero decides to make another slightly smaller one, always in polystyrene.

Sitting in front of the block and starts working it and completes it in a few hours. "I don't do anything long, when it's clear. Thinking is what takes the most time," he says. Just finished, the new model looks like a tablet. The new project was born.

From the beginning Eero Aarnio thinks about the new product to make it in fiberglass to maintain the splendor of the external surface of the previous "Ball chair" but it must be simpler to make, without internal lining. He wants to make the molds without worrying about the internal finish.

Pastil chair is the first Aarnio product suitable for both indoor and outdoor use. The extraordinary feature of Pastil is that it can float on water.
Even more important is the aesthetics obtained with simple and ergonomic shapes.

In 1968 Eero received the American Industrial Award for Pastil's comfortable shape and unique aesthetic. Eero himself believes that the design and ergonomics are so good that they don't need cushions. The New York Times also reports that "Pastil has the ideal design for the human body."

The production and sales rights of Eero Aarnio's best-known projects were transferred in 2016 to a newly founded Finnish company managed by design entrepreneurs. The "iconic pieces" are sold under the "Eero Aarnio Originals" label.
Among the best known pieces of the collection the Ball chair, Bubble chair, Pastil, Pony e Double Bubble
The new ownership has a positive impact on both the price and the quality of the products. The new brand is developed in close collaboration with Eero Aarnio.
Later "new design classics of the future" are produced.

Eero Aarnio is above all an innovator, creator of some of the most recognizable and most loved furniture of the twentieth century.
His iconic creations see a multitude of imitations developing all over the world. An important goal for the new venture is to communicate the value and meaning of the original plans and protect them from illegal copies.