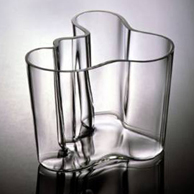 The Aalto or Savoy Vase designed by Alvar Aalto was born in 1936 with the participation and winning of the first prize in the "Karhula-Iittala Glass Design Competition" organized by the Finnish company Iittala which has still been in production since then. The project consisted of a series of pastel drawings on cardboard and paper.

The vase was presented in Paris, the following year, at the International Exhibition "Arts et Techniques dans la Vie moderne", where it achieved considerable success.

The vase was then used by Alvar Aalto as a piece of furniture at the Hotel Savoy in Helsinki from which it takes its name, inaugurated in 1937.

The shape of the Aalto Vase, experimental, fluid, organic and bold, has a universal, timeless charm, it is one of the best known objects of Finnish design and finds its place in the permanent collections of museums around the world, including MoMA in New York. .

Compared to the decorative objects of the time, the organic shape of this vase is revolutionary. Inspired by the waves in the water ("aalto" in Finnish is "wave"), the vase is today a design icon and one of the best known glass objects in the world.

The first prototypes are made by blowing the glass inside a structure of wooden sticks to obtain the characteristic wavy profile.

Aalto has never exactly explained the origin of the inspiration of the "flowing form" and there are various theories. One seems to derive from the dress of a "Sami" woman called "Eskimåkvinnans skinnbyxa", others refer to some shapes created by the sculptor Hans Arp.

Wherever inspiration comes, one thing is certain, Aalto has interpreted it in a way that has elevated his design to a timeless masterpiece.

The initial production of the vase was not without technical problems and the original idea of â€‹â€‹using sheet steel molds with closed and sinuous shapes was abandoned. The vase was originally manufactured by the glass factory using a slowly burning wooden mold.

Each vase in the Alvar Aalto collection continues to be mouth blown in the Iittala factory and is available in a wide range of colors and sizes and transparencies. The Collection is a staple of modern Scandinavian design and Iittala's most iconic series.

Other objects inspired by the Alvar Aalto collection have been created and reinterpreted starting from the shape of Aalto's vase, such as steel bowls, plates and wooden trays. These pieces have been added to the collection produced by Iittala.