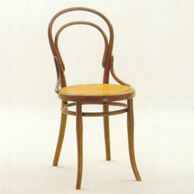 The Thonet No. 14 is the most popular among those designed and manufactured by Thonet. Known as the bistro chair, was designed by Michael Thonet in the IXX century the technique of steam-bent wood. With its affordable price and simple design, has become one of the best-selling book ever made. About 50 million pieces were sold between 1860 and 1930, and millions more have been sold since then.

Thonet No. 14 is composed of six pieces of steam bent wood, ten screws and two nuts. The wooden parts were made by heating to 100 degrees beech strips, pressing them into curves in cast iron molds, and then dry them at around 70 degrees centigrade for 20 hours. [2] The chairs can be mass produced by unskilled and disassembled to save space during transportation, an idea similar to Ikea flat pack furniture.

Later chairs, as pictured here, was in eight pieces of wood: two diagonals have been added between the seat and back, worked hard to enforce this policy.

The design was a response to a need for style café chairs. The seat was often made of woven cane or palm, because the holes would leave in place drain fluid from the chair.

The No. 14 chair is widely regarded as a design classic. It 'won a gold medal when it was shown at the World Exhibition in Paris 1867. It 'was praised by many designers and architects, including Le Corbusier, who said "It was a better design and smarter and more precisely crafted and practical item created."

In 2009, the chair has been redesigned by British designer Jeames Irvine, marketed by Muji, a Japanese company. Ohnacker Roland, CEO of Thonet said that the goal was "to help 18 to 35 years-olds enter the Thonet brand."