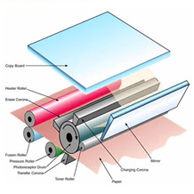 The term was coined by combining the Greek word xeroòs (dry) and the French word graphie (writing).

The xerographic technique, also called electro photography, is a system for copying invented by American scientist Chester Carlson in 1938 and patented in 1942 (under number 2297691).

Chester Carlson, spent eight years trying to find a manufacturer that you value the validity of his own invention and is willing to invest in his project. Among rejecting its proposed industrial realization of the copy machine are the famous computer manufacturer IBM and U.S. military agencies (U.S. Army Signal Corps).

The realization of the machine in series is then undertaken by the firm Haloid, and the technique takes officially the name of xerography. Are then entered into the international market, the first photocopiers whose characteristics will be appreciated by a wide variety of professionals including artists and designers.

The word Xerox is registered as a corporate brand and the company changed its name to Haloid Xerox Haloid. Then changes again its name into Xerox Corporation.