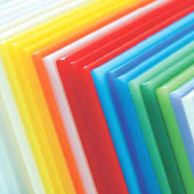 This material was developed in 1928 in various laboratories and marketed in 1933 by the German chemical Röhm.

Chemically, it is the polymer of methyl methacrylate. In common parlance the term methacrylate generally refers to this polymer.

It is also known under the trade names of Acrivill, Deglas, Limacryl, Lucite, Oroglas, Perclax, Perspex, Resartglass, Vitroflex, Trespex and Setacryl.
As a rule it is very transparent, most of the glass, to the point that has characteristics of behavior similar to the optical fiber for quality of transparency, and with the property of being more or less in different percentages, depending on its unbreakable "compound". For these features is used in the manufacture of safety glass and similar items, in accident prevention garrisons, artwork or architectural furniture in general.

Among the examples of its applications include the taillights of the cars, the barriers in the stadiums and the large windows of the aquarium, while a major market is the area where the bathroom is used for the construction of baths and shower trays. Was used in the production of laserdiscs, and occasionally is used in the production of the DVD; for the latter (and for CD's) is preferred, however, the most expensive polycarbonate, because of its improved resistance to moisture.

The acrylic coating consists essentially of a suspension of PMMA in water, stabilized with suitable surface-active compounds, since the PMMA is hydrophobic.

PMMA shows a good degree of biocompatibility with human tissue, for this is used in the production of intraocular lenses for the treatment of cataract. Even the rigid contact lenses are made with this polymer; certain types of soft contact lenses are made of similar polymers, where, however, the acrylic monomer hosts on its structure one or more hydroxyl groups, in order to make the polymer more hydrophilic, HEMA (hydroxyethyl methacrylate).