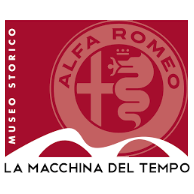 The Time Machine - Alfa Romeo Historical Museum, is based in Arese (Milan), a symbolic place in the history of Alfa Romeo, a stone's throw from the Milan Expo area, inside a real "brand center" with a bookshop, coffee shop, Documentation Center, test track for parades of historic cars, spaces for events and sales showrooms with delivery area.

Alfa Romeo is an Italian car production company known for sports cars, founded on 1910 in Milan as ALFA - Anonima Lombarda Fabbrica Automobili, in 1918 it changed its name to Alfa Romeo.

The idea of â€‹â€‹creating a museum dedicated to Alfa Romeo is attributed to Orazio Satta Puliga, head designer in the post-war years. The proposal, accepted by the president Giuseppe Luraghi, is realized in the Arese headquarters, near the Alfa Romeo business center.

Luigi Fusi, designer, collects, rearranges and organizes the fragments of history with the restoration of the cars.
The exhibition project is realized with the inauguration in 1976, which can only be visited by appointment, but the Museum is closed in 2009.

The New Museum starts from Arese, in an even larger and more fascinating, modern and refined space, La macchina del tempo - Alfa Romeo Historical Museum, reopened to the public after an important redevelopment and set-up, houses the most significant pieces of the Alfa historical collection Romeo.

The set-up underlines the Alfa Romeo identity, depicted through a luminous installation that vertically crosses the building: lights, words and signs of style that are activated in a helical movement that symbolizes stylistic continuity and technological coherence.

Along the way the 69 models that have marked the evolution of the brand and the history of the car are exhibited.
From the first car A.L.F.A., the 24 HP, to the legendary winners of the Mille Miglia like the 6C 1750 Gran Sport by Tazio Nuvolari, from the 8C bodywork Touring to the Grand Prix 159 "Alfetta 159" Formula 1 World Champion with Juan Manuel Fangio; from the Giulietta, the iconic car of the '50s, to the 33 TT 12.

The essence of the brand is condensed into three principles: the Timeline, which represents industrial continuity; Beauty, which combines style and design; Speed, a synthesis of technology and lightness. Each principle corresponds to a plan of the Museum.

Within the area that includes the Museum, there is the Alfa Romeo Documentation Center, born in the Sixties with the aim of preserving and enhancing the history of the brand, collects and houses a large historical archive containing digital images that can be consulted, technical publications , drawings, videos and documentation that traces the entire company, sport and product history, starting from the original act of the foundation of the ALFA, signed on June 24, 1910, up to the documentation on the most recent cars.