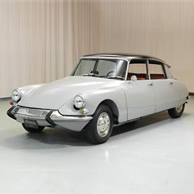 The Citroen DS is a car produced from 1955 to 1975 by the French automaker Citroën.

The Citroen DS is a car built by French automaker Citroën between 1955 and 1975. Designed by Italian sculptor and industrial designer Flaminio Bertoni, the DS is known for its aerodynamic design, the futuristic shape and innovative technology, including self-leveling hydropneumatic suspension.

Presented at the 1955 Paris Motor Show, the DS also features technological innovations that were present until the end of production in 1975. Some solutions have been rediscovered and subsequently adopted by many car manufacturers years later after the release of production.

The DS is equipped with advanced standard in automotive quality, comfort, handling and braking. Citroën sold nearly 1.5 million specimens of series D during 20 years of production.

More than 50 years after its launch, the DS retains its charm due to its lines, comfort and style and revolutionary technical solutions.

Few cars have become established in the history of automotive design so strongly as the Citroën DS, considered the masterpiece of the French house.

In 1999, the DS is ranked third in the competition car of the century, recognized as one of the most influential designer in the automotive world. He was also named as the most beautiful car of all time by the magazine Classic & Sports.