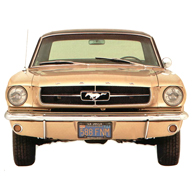 The Ford Mustang is an automobile produced by Ford Motor Company since 1964.

This is one of our most popular and most successful global automotive industry, imitated by many manufacturers is still in production. The original structure was derived from the Ford Falcon.

The initial idea that led to the creation of the Mustang was made by Donald N. Frey and Lee Iacocca, then general manager of Ford. Initially, it must have been a car with bodywork Roadster two-seater mid-engined. Then the car became a four-seater. The design of the car was given to David Ash and Joseph Oros, the study design of Lincoln - Mercury, brands owned by Ford, which turned out to winners of a home game wanted by Iacocca.

The starting platform was that of the Ford Falcon. The frame is revised to adapt to the characteristics of the new car. Is added to an innovative structural system, said Torque Box, which allows to increase the stiffness, the strength and handling of the car, than those of the time, at the same time facilitating the production.

The output of the Mustang will be the first generation of so-called "Baby Boomers", ie young people born after the end of World War II. These are entering the world of work in a blossoming economy.

No manufacturer had thought of this generation and there were no cars dedicated to them. Iacocca was to identify this market niche and to propose a car young and sophisticated.The Ford at that time suffered from a difficult economic situation due to disappointing results, and the disposal of the Edsel, which occurred at the end of 1959.

When Iacocca presents his new car is facing in one direction, with Robert McNamara at the summit, unwilling to risk a new venture.

Iacocca got the green light for production in mid-1962. He was awarded 18 months to design and build the car that takes its name Mustang. At the end of the project is completed in a shorter time and with a budget less than that expected.

The key to success is due to the decision to use the largest possible number of mechanical components already manufactured by Ford. As for the design of the car it is based on internal manual pushing maximum production technology of the time. It is also used new technology that allows for curved glass surfaces.