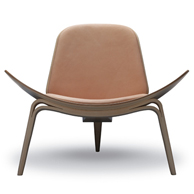 Scandinavian design is the name of a movement made up of designers, companies and products, characterized by simplicity, minimalism and functionality, which emerged at the beginning of the 20th century, developed in the 1950s in the five Nordic countries of Denmark, Finland, Iceland, Norway and Sweden.

In the period between the two World Wars the designers of the whole Euoropa show a shared desire for modernity and innovation in design, in a new trend, where the creative process of design is placed in reaction to new industrial technologies, the Scandinavian designers develop a exemplary style.

In the need to keep in mind the mass-production costs at the base of the new stylistic research, the Scandinavian design creates new lines that enhance the structure of the product and the natural characteristics of the materials used.

In this symbiosis of creativity and industrialization, Scandinavian design focuses on the creation of shapes with delicate profiles, slight inclinations, and sinuous curves, in creations with light, soft and flowing features.

In 1914, the Danish Selskabet for Dekorativ Kunst (Company for the decorative arts) launches its magazine Skønvirke (literally "Graceful Work"). His title became the name of a new style of arts and crafts, to rival Art Nouveau and Jugendstil.

Among the many examples of interpretation of this trend is the Chinese Bench (Chinese Bench) multi-seat chair made of ash wood by Danish designer Hans J. Wegner in 1946, where the natural color of the wood and the soft undulations harmonize with the load-bearing structure of the product.

The Lunning Prize, awarded to the Scandinavian best designers between 1951 and 1970, is crucial for making Scandinavian design a recognized product and defining its characteristics.

In 1954, the Brooklyn Museum organizes the exhibition "Design in Scandinavia" from which he began a fashion for "Scandinavian Modern" furniture in America.

Scandinavian design is not limited to furniture and household products but is also applied to the industrial design of consumer electronics, mobile phones, and cars.

Further applications of the Scandinavian methodology expand to the plastic processing technologies and find their greatest exponent in the world-renowned Danish designer Verner Panton who creates countless creations in various shapes and colors.

Starting from the creation of the Stacking chair, the first to be entirely produced by the use of a single mold, the Panton chair, a further evolution of the technique, and the surreal installations are all an excellent example of the interaction between creative expressiveness and technological evolution .

Another example of similar and subsequent research to Verner Panton is that carried out by Finnish designer Eero Aarnio.