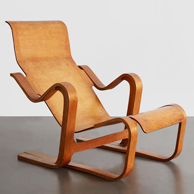 The Short Chair is a 1936 design by Marcel Breuer for the Isokon Furniture Company. It was born from an adaptation of the Long Chair, designed by the Hungarian designer himself, a chair that achieved great success, recognized as a reference point in the design of the furniture of the twentieth century.

This Marcel Breuer project is also made for the Isokon furniture manufacturer founded by Jack and Molly Pritchard in Great Britain in 1931.

After the initial success of the Long Chair, Breuer produced a design for a shorter version that requires less space than the classic long version.
Few specimens were originally produced because the outbreak of the Second World War in 1939 put an end to the production of Isokon.

The Short Chair has a molded laminated birch structure and is available with or without fabric padding.
The one-piece seat and back are made by modeling and gluing 5 layers of crossed fiber plywood, inside a special shaped mold, giving the impression of floating in the air, suspended in the frame.
The veneers are between 1.5 and 2 mm thick.

The frame structure is composed of two vertical posts of 10 layers of laminate which support the arms and a horizontal post which reinforces the legs. The zebrano veneers have a thickness between 1.5 and 2 mm.

The plywood seat and back for the original chairs were mass-printed by the Estonian company Luterma and shipped to Great Britain to be assembled to locally produced frames.

The design of the Short Chair is a direct "translation" of the Breuer chairs made of steel and aluminum from 1932-1933 into plywood.
It shows the influence of plywood furniture designed by Alvar Aalto (for example the Paimio chair from 1929-32), a Finnish architect and designer.
Aalto's furniture had a soft, organic aesthetic, welcomed more favorably in Britain than the steel pipes used in Germany.