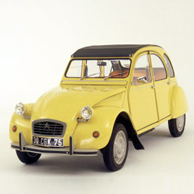 The 2CV Citroen (two horses, from the evaluation of tax horses in France) is a utility car produced by the French car manufacturer from 1948 to 1990.
Model, very popular of which 3,868,643 were sold.

The first ideas of constructing a low-cost, large-scale utility car come to mind with André Citroën during the early thirties, but they are shelved in favor of the more expensive Citroën Traction Avant project.

Following the serious financial crisis of the company in 1934, André Citroën is ousted by Michelin, one of Citroën's main creditors. The latter, already seriously ill, dies in 1935.

Pierre-Jules Boulanger at the head of the Citroën, takes up the idea of â€‹â€‹the economic car, of great diffusion, both to develop the French motorization, and to revive the economic situation of the French House.
Boulanger instructs the office manager Maurice Brogly asking to study a car for two people (two farmers in clogs) and 50 kg of potatoes, or a barrel of wine, at a maximum speed of 60 km / h, with a consumption of 3 liters per 100 km.
In addition, it is equipped with suspensions able to carry an egg basket without breaking them, crossing a plowed field also ensuring unquestionable comfort.

Boulanger also asks that the new car has low running costs, that maintenance is easy and can be performed even by less experienced customers, on the mechanics of easy access. The last specification, the most curious, that the driver can get on the car with the hat on his head.

The first full-size wooden model was built in 1936, while the first working prototype (of the 49 totals) was built the following year. The first tests are performed with the prototype equipped with a 500 cm³ engine, extracted a BMW motorcycle but queto does not stand the effort and the project is restarted from the beginning.

It was launched at the 1948 Paris Salon, and is a revolution. Its unusual appearance amazes and arouses great interest along with its ultra-economical character and the air-cooled two-cylinder engine.

In order to keep the project secret, the Michelin family buys an estate surrounded by a three meter high wall at La Ferté-Vidame. A test track is built only accessible to the closest collaborators.
All this confidentiality was due to the fact that at that time the project of a high popular car was under way, the Beetle.

At the end of 1938, Boulanger thought he could market the new car within a few months but some problems such as poor engine access, too soft suspension and poor Plexiglas windshield will have to be solved.

The 2CV sedan, marketed in 1949 under the name 2CV A met a resounding success, its use as a commercial vehicle, and his dexterity in moving in the crowded centers of the city came to think of a real utilitarian version with a sufficient cargo space.
At the Paris Motor Show 1950, Citroën introduced the utilitarian version of the 2CV, it was a small touring van almost identical to what became the final version sold after six months, in March 1951.

The mechanism was that of the 2CV sedan A. had a small twin-cylinder 375 cm3 lender the power to pull a body 9CV which was already heavier load than the sedan, plus any load of 250 kg, this fact was its scope. The van he performed his difficult task not without difficulty, to the limit of his strength. On paper, things were not so bad, its top speed was 60 km / h but could not hold up in third gear, then second, then he found himself at first, inerpicando to 15 km / h the climb, immersed in a loud rumbling.

2CV AU saw the first touring van, like the saloon, its delivery times increase more and more, demand was strong. The 2CV touring van brings out a fine career, AU, AZU and AK then follow one another until 1979, when it gave way all'Acadiane, commercial version of the latest Dyane.