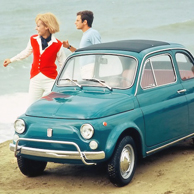 The "New 500", designed by Dante Giacosa, Fiat to chief technical officer, is for Italy's postwar dream of widespread wealth, the social tranquility, you start to see in those years of late 50's. The 500 looks like the market made â€‹â€‹up of workers and "proletarians" who dream of replacing the "sale" or "Lambretta" with a real car but also a middle class and middle class looking for a small car for women and children drivers.

The genesis of the 500 is long and complex, in spite of the car is simple and of small dimensions. The idea of a compact Fiat was a long time ago, the concept of "car for everyone" that evolves with  the Balilla first and the 500 "Topolino" then.

It seeks to achieve the minimum car, perfect for powering Italy and Fiat is attentive to the news about the project such as the testing of front-wheel drive, but for which the prototypes are rejected by the leadership.

Dante Giacosa, Fiat to chief technical officer, to set the new small car is concentrating its efforts in maximizing the maximum efficiency of existing technologies, rather than indulge in daring flights of fancy like the front wheel drive.

Around the mechanical, Dante Giacosa imposed, personally, the vehicle body. He wanted to be sure of the result - and complacency of the "professor" Vittorio Valletta - for this maquette made â€‹â€‹two: the first, clearly of 600, while the second has a more distinct personality, but always tied to the same aesthetic.