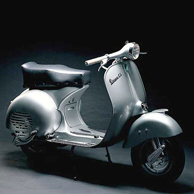 Italian industrial design was born in the period between the first and second World War with the founding of the Biennale di Monza in 1930 and the Milan Triennale in 1933. The first prototype of industrial design consists of an electric charge of a project carried out by the RIBA.
At the same time produces the first helicopter, and is kicked off two new lines, an engineering related to consumption growth, and more related to an architectural design phase.

After the Second World War, mass production increases and populations begin to familiarize yourself with industrialization because of the marketing of articles of furniture produced.

In 1950, industrial designers and craftsmen began to focus on finding correspondence between form and function according to the current "good design" constitutes a factor which will then be criticized by some designers since 1960. More than the current will be criticized if the use of "good design", too elusive to describe the relationship between form, appearance, sensory element, weight, volume and function of an object.

Towards the end of 1960, a new wave of industrial design tries to get rid of constraints and restrictions, developing relationships between form and function of the product in more detail. Among the main features of the new movement is the attempt to create a style that is free of class barriers. At the Museum of Modern Art, New York (MoMA) exhibition called "Italy" will represent the culmination of the field of rehabilitation, during which the industrial design creations take on different shapes and colors.

In 1981, after a lull lasting nearly a decade, founded the movement started by architect Ettore Sottsass Memphis, which takes up the themes that characterized the design of the period between 1960 and 1980, enlarging and reshaping them in part. The research to expand the functionality of the object that had characterized the current, Ettore Sottsass also adds a vision of ecological problems.

The Italian design has traveled throughout the twentieth century, leaving an indelible mark on how the shape of everyday objects is perceived in contemporary industrial society. This "Italian way" has succeeded, through a complex and hesitant process of industrial innovation and new technologies, to develop a culture of independent design and multi-faceted, combining the rich tradition of craftsmanship in the country with an aspiration often fiercely opposed to modernity , consisting of flashes of improvisation and irony, and combined with a lively appetite for experimentation. In this sense, the history of Italian design has not yet been the subject of exhaustive interpretation of cultural and artistic dimensions of the phenomenon and, in particular, little has been said so far on the synergy between artistic experimentation and innovative design that has characterized the entire twentieth century.

The broader field of Italian industrial design is related to furniture and furnishing, in which Italy is a world leader. Other areas are the lighting design, automotive design and yacht design. Among the sectors in developing graphics and web design.

LINK:
The masters of Italian design