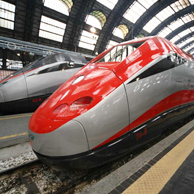 science that studies the air penetration of corps

Aerodynamics is a science of the branch of fluid mechanics (fluid dynamics) that studies the dynamics of gases, in particular air, and focuses on the analysis of the interaction between a fluid current and a body immersed in it.

The resolution of an aerodynamic problem generally involves solving equations for the calculation of different air properties, such as velocity, pressure, density and temperature, depending on the space and time.

You can define aerodynamic design that uses the forms derived from 'aerodynamics, science that studies the penetration in the air.

In particular for the design of products such as cars, motorcycles, trains and even bicycles (to name only the most common), the study of aerodynamics determines the search for the best shapes to allow the best penetration into the air of the object with the double advantage of increasing speed and reducing the force or energy used for movement.

Exemplary in this sense are the research carried out at the bodywork of sports cars, the hulls of motorcycles, the bicycle frames, especially in the sports field. Also relevant are the applications to train locomotives or truck engines.

In the field of industrial design, the term Streamline is used for the most important design movement in US technical culture. The lines that characterize the Streamling are born from the studies that have developed since the '20s, thanks to the invention of the wind tunnel on the Cx air penetration coefficient.

The movement owes its name to the search for aerodynamic shapes.
Later, for many years, the word "aerodynamics" is used in popular language as a synonym for "modern".

The aerodynamic styling in the period between 1930 and 1950 is adopted to characterize the design of the cars. Subsequently it is applied to the design of numerous types of objects to communicate feelings connected to the idea of â€‹â€‹movement and more generally of modernity.

A design with aerodynamic elements can, depending on how they come into contact with the others and between them, define different moods and moods.
Among the favorites of the public and the personalities are often those related to the signifiers of positivity, intellectual dynamism, and pragmatism.

In a more general and extended sense, in mass production, aerodynamic styling is applied as a modern signifier to a wide range of products such as radios, telephones, computers, stationery, home appliances, furniture, trainers, and many others.