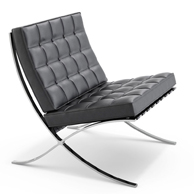 Barcelona chair is an icon of industrial design, of the "modern movement" and of design in general. With its elegant simplicity, it embodies Mies van der Rohe's famous motto "less is more".

Conceived "for the rest of a king", according to the words of the same author and to welcome the royalty of Spain on a visit to the Exposition of '29, it is a reinterpretation and a quotation of the "sella curulis", an Etruscan bench introduced into ancient Rome , foldable, saddle-shaped with four curved legs, X-crossed.
The inspiration and cultural reference to an ancient civilization, together with simplicity and formal purity, give the Barcelona chair a timeless charm, testified by the success achieved and the uninterrupted production from 1930 to today.

Barcelona chair is designed according to the technological possibilities of the time, the metal part is initially composed of several parts joined with bolts.
In 1950 the project is updated to recent materials and techniques, such as steel, which allows you to create a continuous structure, with a lighter and more elegant ensemble.

Taking advantage of the technological potential of the material, ductile and resistant, Mies designs as a supporting support two crossed and continuous curves lines of extreme fluidity, two slender curves, soft, a structure in drawn chromed steel and support belts made with the same leather of the covering cushions.

The padded upholstery initially involves the use of ivory-colored wild boar leather, later replaced by bovine leather divided into forty squares from the same cut, hand-sewn and quilted with buttons at the corners of each square.

The production of the Barcelona chair never stopped, it was made both in Europe and in the United States in the 30s / 50s and is still present today in homes and offices around the world.

With the author's consent, the Bamburg Company makes some design improvements. After observing the deterioration of the joints, the connection point is moved inward, increasing the stability and durability of the design. By 1932, the intersecting joint had been hidden under the leather straps of the chair, giving the design a uniform appearance.

In 1938, Mies van der Rohe escaped from Germany and moved to Chicago to become director of the Illinois Institute of Technology. At the IIT in Chicago he is contacted by the ex student Florence Knoll who proposes the idea of â€‹â€‹industrially producing the entire Mies furniture collection for the American and international markets. As Florence's first mentor and tutor, Mies decides to grant Knoll Inc. the production right.

Knoll production begins in 1947. Manufactured at the East Greenville, Pennsylvania factory, the first models are chrome, quilted on one side and feature a flat piece of leather on the back. The distinctive feature of a Barcelona chair manufactured by Knoll is the thick fillet tubing seen on the cushions, padded with a thick industrial foam. The labels on the original leather parts certify the Knoll production.

Specimens of the Barcelona chair produced in Chicago by the metalworker Jerry Griffith, began to appear in 1960. This version is the first to use stainless steel.

Since 1953, the production and marketing rights have been transferred by Mies Van der Rohe to the Knoll brand, having been Mies friend and mentor of Florence Knoll during his period at the Illinois Institute of Technology.

The furnishing elements created by Mies are examples of "modern design", timeless and without fashion. A "minimal" design that eliminates the superfluous and the "decorative" to enhance the line and the shape with which Mies Van der Rohe obtains the "maximum effect with minimum waste of means".
The linguistic simplification of Mies van der Rohe, in architecture and design is extremely sophisticated, moves in search of a universal essential.