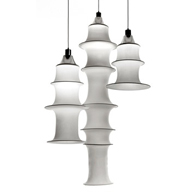 The ceiling lamp Falkland has been designed by Bruno Munari in 1964 for Danese, originally designed using a tubular elastic mesh, produced in a stocking factory, which takes form through the incorporation of some metal rings of different diameters.

The story of the birth of this object is symptomatic of the design genius of Munari: involving a company that manufactured women's stockings in realizing one of the most famous Italian design lamps.

Munari told himself: "One day I went to a factory of socks to see if I could make a lamp. We do not make lamps, they said. And I see that you do."

The lamp Falkland defined as "spontaneously" assumes its appearance when it is suspended, the effect of gravity.

Taller than five feet when suspended, with a diameter of forty, is compact in its box a few inches high.

Designer, artist and educator, alert and curious observer, Munari stands in the world of design for simplicity and linearity of its objects and the essential structural logic.

The Munari design project in a global sense, which can be applied to smaller things like the big ones, even if the end is always a search for essential structures, an extreme formal simplicity.

Thus its lamps, designed in the early sixties, are constituted by an internal structure carrier and an outer part which regulates the type of lighting.

The relationship between the two parties determine the form, the low cost, ease of installation and being able to flatten the convenience of storage and shipping: Falkland is the most famous example of this type of lamp.