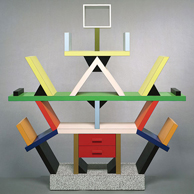 A library-totem object becomes a symbol of the entire production of the Memphis group, founded in 1981 by idea of Sottsass, De Lucchi and Root. Carlton has shaped vaguely anthropomorphic, because it recalls the image of a man with his arms raised and legs spread, can be used as a library or even as a partition. The bright colors are typical of the group and movement Neomodern.

Memphis was founded in 1981 by architect Ettore Sottsass and a group of young Milanese architects and designers. The playful colors, materials and motifs of the furniture, ceramics and glassware was unveiled by memphis designers at the 1981 milan furniture fair. Memphis split the design world and caused a media sensation after years of drab rationalism. Memphis Milano became the radical design movement that achieved iconic status. Now part of museum collections world wide.