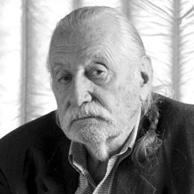 Ettore Sottsas was born in Innsbruck on 14 September 1917. He has dedicated himself to various disciplines, such as painting, ceramics, architecture and design.

Internationally known as one of the initiators of renovation in design and architecture, thanks to which the rigid functionalism of the years before and after the Second World War has been overcome.

Great and influential Master of Italian design, in his language the potential energy and the vitality of drawing and color stand in contrast to all intellectualism and rigidity.

After graduating in architecture at the Polytechnic University of Turin in 1939, he began his activity in Milan in 1947, where he established his first design studio, which will be the main field of activity since 1958, contributing to the international affirmation of the Italian style.

In that same year he began his collaboration with Olivetti, where he was responsible for the "computer design" sector. In about thirty years he plans for the Ivrea company numerous objects including the calculator Logos 27 (1963), the typewriters Praxis 48 (1964), the famous Valentina (with Perry King) and the office system Synthesis (1973).

It is above all in the design of the furniture that the innovative power of Sottsass's ingenuity knows no obstacles, making the architect a central figure in international design.

In advance of the years of protest, he had indicated design as an instrument of social criticism, paving the way for the great season of Radical Design (1966 - 1972) and the affirmation of the need for a new aesthetic: more ethical, social, political.
Disappointed by an increasingly voracious industry, Sottsass plans the union of the contemporary avant-garde, Pop, poverty and conceptual suggestions, with the goddess of a "reassuring" design, a supporter of an alternative consumerism to that imposed by the "advertising company" .

He participates in numerous Triennali di Milano, and is part of the "Global Tools" movement at the end of the seventies together, among others, with Andrea Branzi, Gaetano Pesce and Alessandro Mendini.

In 1981 he founded the Memphis group together with Hans Hollein, Arata Isozaki, Andrea Branzi, Michele de Lucchi and other names on the international scene.

Born in Milan, Memphis brings together a group of young designers and architects, from all over the world and led by Ettore Sottsass, animated by the need to design other spaces and other environments compared to what was then the panorama of furniture related to furniture . Since the first appearance, the shapes, colors and decorations of Memphis have changed the face of contemporary furniture.

Artist of various interests, son of art, he contaminates the academic training of an architect with direct experiences in the field of visual arts, knowing and making friends with artists like Luigi Spazzapan, as well as opening collaborations with young people who will become important names of contemporary design. from Aldo Cibic to James Irvine or Matteo Thun.

Triestre is home to the last exhibition dedicated to Sottsass still alive: "I would like to know why". Organized in seven thematic sections: industrial design (design), architecture, photography, jewelry, design, ceramics and finally glass, the so-called delicatessen, as defined by Gillo Dorfles after having viewed the project.

Each island contains within it a temple, a secret place where you can discover objects, drawings, photographs ...

The sections set up in the space of the former Pescheria are accompanied by a tribute in the Sala del Trono of Miramare Castle, consisting of a small selection of the vast production.