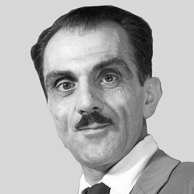 Carlo Mollino was born in Turin on May 6, 1905. He devoted himself to design, architecture and photography. Son of Eugenio, a well-known engineer, architect and builder from Turin, he graduated in architecture with honors in 1931 and pursues his professional activity in a diversified way, in many sectors.

He designs and manufactures a rich series of furniture, in the most varied and original types, but also airplanes and cars. After a short period of work with his father, he leaves to start his career.

Between 1935 and 1939 he signed the headquarters of the Turin Horse Club, unfortunately demolished in 1960.

Carlo Mollino begins to produce furniture, such as the "Milo" mirror from 1937, in the shape of Venus de Milo, he designs interiors, such as Miller House in 37. The furniture he designs are often unique, short-lived pieces, produced for the customer for decorated the house. Many of his pieces are therefore very rare today.

The Miller house has an innovative lighting system, a fixture mounted on a track, which curved around the ceiling.

In the 1930s Carlo Mollino built several buildings of considerable importance in Italy: the sled lift station with hotel at Lago Nero in Val d'Aosta (1948), the RAI auditorium in Turin, the monument to the fallen for freedom in the Turin cemetery with the sculptor Mastroianni, the project for the Chamber of Commerce (1964) and the Royal Theater of Turin.

The company that produces most of its work is the Apelli & Varesio carpentry shop in Milan. Other interiors are produced in 1944 for the Minola house.
The pieces created include a radio-gramophone and a glass coffee table.

To this unbridled design activity he adds those of photography, aerobatic aviation, motor racing, from which he absorbs experiences and technologies for the design work. Considered one of the symbols of the entire period of the 1950s for his work, he also accomplished important projects such as the seat of the Faculty of Architecture in Turin where he held the chair of Architectural Composition and Decoration from 1952 to 1970.

In the early 1950s Mollino dedicated himself to the automotive world with projects such as the famous Nube d'Argento coach (1954) commissioned by Agip-Gas, which was definitively decommissioned in the 1990s, and the Bisiluro (1955), the competition car with which Mollino overcomes the rigid selection of the 24 Hours of Le Mans.

He also works as a designer of fashion, theater and cinema sets, although the product of these researches has never been well documented.

Recognized among the most brilliant architects of our century, Carlo Mollino has joined his profession with other interests that are deeply investigated and often resolved with exceptional creations and publications. Skiing, motoring, fashion and literature together with photography constitute real chapters of his intellectual life. His furniture is exhibited in the collections of the most important decorative art museums in the world.

In the 1940s and 1950s, the explosion of design in Milan created the elegant, fashionable and modern image of Italian furniture. In Turin, there was Carlo Mollino who worked on natural and animal forms, branches of trees, horns of animals, the curve of the human body, to establish the "aerodynamic surreal" series of furniture designs.

These pieces, developed from the appreciation for the forms of Art Nouveau and the architect Antoni Gaudi, are more expressive, "more sculptural" than those produced simultaneously in Milan. The changes in his style over the years have followed the evolution of wood bending technology.

Many of the most famous pieces onf Carlo Mollino are designed for Zanotta. The "Ardea" armchair (1944) with the wooden base and the padded seat with the removable cover, produced with bright colors.

Mollino creates several tables with a glass top. "Reale" from 1946 for Zanotta and "Arabesque" from 1950 for the interior of the Singer shop in Turin.
Arabesque has an upper and lower glass surface, supported by a molded plywood, folded to form a magazine rack.

He presented similar tables with glass plates in the "Italian design of the 50s" exhibition organized by the Kartell research center, Centrokappa, as well as several beech wood chairs with slightly bent backs and pointed and carved legs.

In 1954 Zanotta made his "Gilda" armchair in ash with an adjustable wooden structure.

Among his many hobbies he is a passionate photographer, student of the occult, acrobatic pilot, passionate about racing cars and planes.

Carlo Mollino designs several cars and planes, and his racing car "Osca 1100" wins the "24 hours of Leman" of 1954 in its category.

A chair designed in 1940 for Gio Ponti, recalls the image of a "clove" plinth, for many an icon of his interest in the occult.

Carlo Mollino's photographic work can be divided into five sections:
Photomontages of architectures and interior photographs for sector magazines.
Surrealist black and white photography around the 1940s.
Photography dedicated to skiing, largely made for the publication of his volume of skiing technique.
Photograph from the second half of the 1950s.
Polaroid, female portraits made from the sixties, until death.

After a long period since his death, in which little has been done to keep the memory, Carlo Mollino is rediscovered and valued for his extraordinary and multifaceted talent. Retrospectives are organized in galleries in London and New York and also in Italy to present the work of this unusual man.

He remains one of the most controversial figures in architecture and Italian design. His unmistakable style and his philosophy still inspire the new generations of designers.