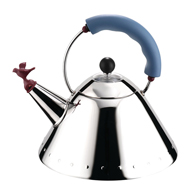 The 9093 kettle with bird-shaped whistle, created by Michael Graves in 1985, is one of the best-selling Alessi objects in the world, considered among the company's best sellers.

The design of this kettle blends influences from European Art, American Pop and quotes from pre-Columbian cultures.
The highly commercial success of Alessi's 9093 kettle since the year of its production is due to this highly personal language of Michael Graves. A cultured object, with an elegant design, but also fun: when the water boils the bird sings, inevitably tearing a smile.

This kettle is one of the most famous products in the Alessi catalog: it is the progenitor of a series of objects designed by Michael Graves from the 1980s and has certainly inspired a whole series of "pop" objects that have become true icons of the design of the 90s.

The Alessi 9093 kettle combines simple technology with timeless design. Made of 18/10 stainless steel, with handle and bird's whistle in Pa. The color of the handle can be chosen in three different colors: blue, white and black.

The dimensions are: diameter 22 cm, height 22.5 cm and capacity of 200 cl. with a magnetic steel bottom perfect for induction cooking.

The creator of this object is Michael Graves, professor of architecture in Princeton since 1962, world-renowned designer with many important works under his belt, including some architectural ones, such as the Portland Building and the Humana Building, the extension of the Whitney Museum of American Art, the Newark Museum. For Alessi, however, he created this kettle 9093.

Alessi has a long history, during which she was involved in a change that led the company to become one of the most important Italian design companies. Despite the great commercial success, Alessi continues to work on technological evolution, trying to keep up with the times, both in terms of tastes and techniques.

Alessi objects are an example of the purest Made in Italy, combining the artisan quality that only companies with that history can give, with the modern use of all the tools available.

Design is the perfect mediation between art and industry: Alessi's new mission is to work on a boundary line, in balance between the most advanced design expressions and the needs and tastes of the public.