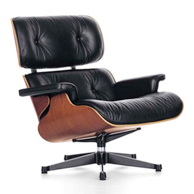 The Eames Lounge Chair and ottoman footrest are furnishings designed by Charles and Ray Eames for the Herman Miller furniture company, made of molded plywood (laminated) and leather.

The official names of the two pieces are Eames Lounge (670) and Ottoman (671), were produced in 1956 after years of studies and development by the designers.

Eames Lounge Chair was Eames' first chair designed for a high-end market. Examples of these furnishings are part of the permanent collection of the MoMA Museum of Modern Art in New York.

The Eames Lounge Chair appeared for the first time on the Arlene Francis Home television show broadcast by the NBC network in the United States in 1956.

Immediately after the debut, Herman Miller launched an advertising campaign that highlighted the versatility of the chair.

Since its introduction, the chair has been produced continuously by Herman Miller in America. Subsequently, the Vitra company (in collaboration with the German furniture company Fritz Becker KG) started producing the chair for the European market.

In the United Kingdom, 10-year production has been licensed to Hille International LTD since 1957.

Immediately after its release, other furniture companies began to copy the design of the chair. Some have made direct copies, others have simply been influenced by design.

The former Plycraft Company published dozens of chairs that were direct or in-style copies of the Eames 670. Later, Chinese and European companies began making direct copies. However, Herman Miller and Vitra remain the only two companies producing these original chairs with the name Eames.

In 2006, to commemorate the 50th anniversary of the chair, Herman Miller created the models with a sustainable rosewood veneer.